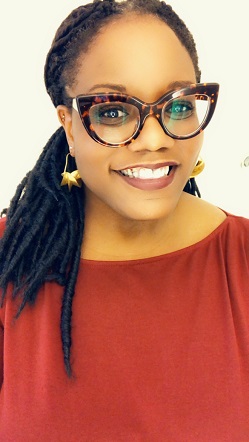 Athena Dixon founded Linden Avenue Literary Journal in 2012 as a way to claim her own space. After ending a marriage, she wanted to prove to herself that she was capable, talented, and worthy on her own. That same year, after being called to expand and emerge, she decided to return to prose, a genre she hadn’t seriously practiced since her early adolescence. Since then she has authored a poetry collection titled No God in This Room (Argus House Press. 2018) and a forthcoming memoir called The Incredible Shrinking Woman (Split/Lip Press 2020). She is also wrapping up a novel and making significant progress on her graphic novel. Athena has blossomed into a multi-genre writer. I met Athena during my senior year of college while virtually interning for Linden. Since receiving an MFA in Creative Writing late last year, I’ve been working towards becoming more comfortable getting and staying outside of my creative comfort zone. So I reached out to Athena for advice. We were able to have a conversation about managing multi-project backlogs and dealing with imposter syndrome as multidisciplinary artists.

I think part of it is a lot of trial and error at first. When I started writing I was writing fiction. Then somehow, someway, I decided I was going to be a poet. So I wrote poetry almost exclusively all the way through my teens, twenties, and early thirties. In 2012, I felt like I didn’t have enough space in short form poetry. I felt like what I was saying was being lost. Now, 8 years later, I’m writing almost exclusively prose. I’m a visual writer because I start everything I write with a sense. So if I’m going to write something it’s going to be based off of a song, a smell, a sight, etc. Figuring out how best to relay that was what worked for me.

The essay collection started off as a poetry collection in my graduate program. Then I switched from trying to confine the words to letting them be free. I will say that came with a lot of doubt and fear. I think part of being willing to expand in other genres is being willing to fail. It’s being willing to get over the idea of being disrespectful to other people with expertise and trying to figure out if what you’re doing makes sense in the form it’s in.

Can you say more about what it’s like having a multi-genre work schedule or backlog?

Sometimes figuring out the present need for the moment is up to me. Sometimes it’s actually up to the work. There are times when I will be at work and I’ll have a particular scene pop in my head. I’ll scribble something down and email it to myself so when I get home I can pick up where I left off. Most of the time it’s a matter of saying ‘I have x amount of time. This project needs to be done for these particular reasons’. Then I move to the next one when that is done.

It really is a matter of trying to pick the project, why it needs to be, and then figuring out how it’s going to come to life. I have to make it a priority to balance it everyday. I have practical everyday things that I do in order to manage everything. I work a regular 9-5 job. All of my writing happens between 4pm-10:30pm. I have a life. So if I get an hour or two a day to write that’s an amazing thing. Unless I have something to do, the bulk of my writing happens on the weekends.

It’s interesting that you mention not only planning to sit down and write out the project everyday, but to set the tone by reminding yourself why it’s important and why it matters. It seems common to abandon a project when it becomes frustrating and start something completely new in it’s place as a distraction.

Well, I think that’s why having multiple projects going works. There are times when it gets very frustrating to work on a particular project but having the means to step away from it is nice. I know that if I’m frustrated with the novel, I’ll let it marinate for a bit. I won’t work on it that week. I’ll move on to another project so I can still feel like I’m doing something without feeling like I’m wasting the time that I do have.

Time management is one of the ways I think creatives do each other a very big disservice by making it seem like you have to sacrifice. We don’t allow people to see what it’s like to really balance regular life along with your writing. We think we’re supposed to have this beautiful space where we get up and we write our pages. In the evening, we drink our wine and write our pages. That’s not real life for a lot of writers. Most write when they can and where it fits in. They barely write well in the time that they do have.

I know you’ve talked a lot about imposter syndrome and how it affects your writing process. How you think it affects multi-genre and multidisciplinary artists?

For me, part of imposter syndrome is a confidence issue and not even an accomplishment issue because it takes stepping outside of my comfort zone and asking people to see me. A lot of times when I’m in the depths of imposter syndrome I feel like I’m being lapped. It might be my educational background, the things that I’ve accomplished, the publications I’ve had. I feel like I should be doing a lot more than I’m doing. A lot of that is validated by being entrenched in the literary world on social media, or by being in writing groups where everybody seems so successful, confident, and talented. I’m like “are you sure that I’m supposed to be here?” It happens all the time. My instinct is always to feel like someone’s going to drop the other shoe.

In this day and age too, knowing that most writers aren’t going to get to be successful in one genre, then it behooves people to have strengths in multiple genres. You have to cross-pollinate what you’re writing. Whether that be interviewing people on a podcast, writing poetry and memoir, writing opinion pieces in magazines, or anything along those lines. I think we’re in this age of hustle where you don’t have a choice.

As a student, I really had to lean on the people in my program because they were the ones who were giving me feedback on my work. I was probably a very bad workshop partner because I was very keen on submitting my work and being like “ok this is trash.” It took them saying that it wasn’t to realize it. In undergrad I was trusting the people in my program to not be lying to me. My father calls it “rarefied air” because not everybody gets to be in a graduate program or undergraduate program. I had to understand that there was a reason I was there. It took me listening to those people to realize that if they were talented enough to be there then I was as well. Not everybody gets to be in these spaces. Especially as a black woman. It seems like everybody is in college but they aren’t. Let alone having multiple degrees.

Now, it sounds kind of cocky, but I keep a file folder on my phone called “writing wins”. It’s screenshots of all my accomplishments. I have these moments where I feel like I’m not accomplishing anything or not getting anywhere. So I scroll through and see everything I can be proud of.

I’ve heard of people doing that with their rejections or even their older work. I’m happy to hear you say you hold space for wins too because reading the first poem I ever wrote or even the essay I wrote last year doesn’t always make me feel better.

Now mind you I read some of the stuff I’ve published and I’m like ‘why did that even get sent out?’ But it got published. And in general I keep I “writing wins” folder on my phone but I also have one for everyday life. I keep ticket stubs and little things like that. At the end of every year I review all of the good things that happened to me. Then I box them up and store them. It’s something I do consistently because as a person who deals with depression and anxiety I have to have a handle on the good stuff. For me, it’s already in my head anyway, I don’t need to relive rejection and horribleness. I don’t need a physical reminder. I know. I can tell you about the exact email from when I got my first rejection for the manuscript that’s about to come out now. I don’t need to keep it.

I have to lean on other people, but I also do these little things on my own. I have a little text box on my mirror. I keep a copy of my book on my nightstand. I keep sticky notes on my actual work desk. I keep little things that remind me the life I’ve imagined is getting to where I want it to be.

Gabrielle Lawrence is a freelance writer, editor, and writing instructor from Southern California. Her writing has been nominated for Best of the Net and Best New Poets. She serves as the Editor-in-Chief of Linden Avenue Literary Journal and her work can be found in Another Chicago Magazine, Rising Phoenix Review, The Squawk Back, Gravel Magazine, Sundog Lit, and others. Follow her on Twitter @gabrielle__l or visit gabrielle-l.com for more info.