“WHERE WERE YOU WHEN THE GREAT FISH CAME GNAWING?” by Cavin Bryce 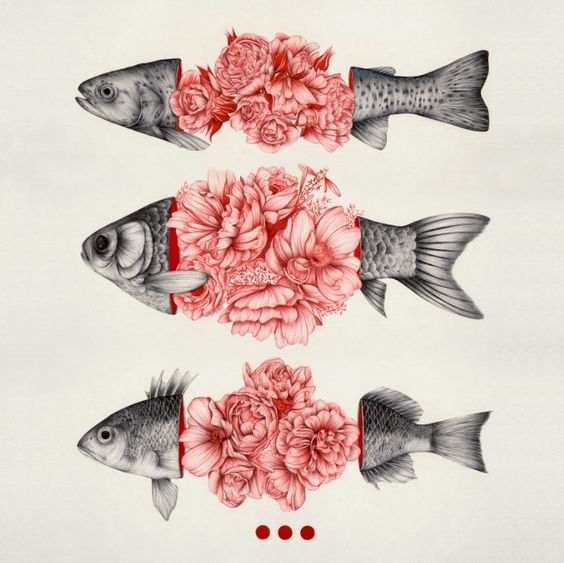 “To Bloom Not Bleed” by The White Deer

The Earth existed then as one all consuming ocean spotted with a single island near the equator. It was a thin strip of sand only four feet in length at its widest point, but warm and soft so the native boys never complained. The sky was only ever perfectly covered in thick, morphing clouds. It rained incessantly.

On this island lived a pack of feral boys, the last of the humans. Their skin was honey colored, a hue reminiscent of sunlight refracted through amber. The boy’s sported differentiating features spare their skin tone; the colors of their eyes, shapes of their bodies, and thickness of their hair all varied greatly

In front of their beach was the ocean and behind it existed a world of vines and trees. Eyes of all sizes watched them from both the ocean and the forest. This observation was constant. Sometimes, these glaring eyes carried voices with them, starving voices from a dead world. If ever they wandered too far into the brush, or the ocean, the boys were quickly hunted and ripped to shreds by the monsters that watched them from afar.

At first the boys would travel deep into the jungle, swim out into the blue expanse of the ocean, in an attempt to uncover any evidence of their forgotten past that may still remain undamaged. Many of them perished during those endeavors, and the curiosity of the remaining children was eventually made obsolete by the drive to live. Their food sources were thinned to tiny fish, the children of colossus parents, and an assortment of berries. The boys ripped into the slick bodies of fish with a near animal instinct and consumed everything raw; scales, flesh, bones, and fins, everything but the eyes. Even the youngest of the pack would snap the head off of whatever he could catch and slurp their organs up savagely.

Water was collected in crudely woven baskets, or in containers that washed onto their shore. The largest of these containers was labelled: 2% Skimmed Fat. It held a lot of water.

One of the boys was named Gardner. He was gentle, with soft eyes and a light touch, one of the few who took initiative to look after the smaller children. One morning he woke up before all the other boys and waded into the shallow water bordering himself and the great beasts. There, he rinsed his hair and stared into the rising sun’s rays. He heard the whispers of lesser creatures, as one always did when they neared the water or forest. They whispered promises of a kingdom in the sky, above the infinitely raining clouds, where he would reside after death. The sirens talked of a place where hunger and pain didn’t exist, where the sun kissed your skin. Amidst these whispers came a great booming voice that drowned out the lesser creatures.

“It’s over,” the dominating voice said.

“What is?” Gardner thought.

“Your life. Your species.”  Gardner scoffed. Nothing could reach them on the shores.

“Come, boy, swim out here and see what is left of your people.”

He hesitated, straightening himself in the shallow water.

“Come, come and see why you are so content on your puny island.”

The rest of the boys awoke to see the eldest of them paddling out into the ocean. They screamed bloody murder at their comrade. His name, Gardner, clung to the moisture in the air, vibrated with the force of their confusion and sadness. He hoped, as he paddled, that they would be safe without him.

When Gardner reached the trench he turned to the shore of his beach. He could see nothing but a blur, heard nothing but distant screeches and pleads. When he looked down into the ocean, he saw nothing but an encompassing blackness and jagged rocks. As he plummeted into the water, deeper and deeper, there still was nothing but rock and water.

“And that is what’s left. My siblings and I, along with the boars and great apes, consumed your civilization long ago. Out of sheer pity, we have allowed your pack to survive all this time on that pitiful island.”

Dead, glowing eyes each the size of the moon appeared suddenly from the blackness. Beneath them, a mouth cracked opened and revealed aisles of jagged teeth that emulated, in size and shape, an ancient mountainscape.

“We can’t stand to see life so idle any longer. Before you were demolished, your people found meaning in activity. It is cruel to keep you like this, unchanging and unmotivated.”

It was hard to admit, but the beast was right. Day after day the boys ate, washed themselves, and played. Then the next day they did it again. It was all without purpose, without an ounce of understanding.

Inside the intestines of the monster, Gardner saw entire cityscapes in crumbles. There were vehicles and neighborhoods, even entire islands floating in gastric acid. Memories of a time long ago flooded Gardner’s brain. He remembered his brother, his mother.  He hoped that this beast would take his home in one fell swoop and that none of this brothers would feel any pain. There was the slightest feeling of hope, as his last breath oozed from his lips, that he would see them again in that place where it never rains.