Do you believe in a love that informs, enriches, and encourages creativity? What is the purpose of love, if not to uplift us, becalm us, and embalm our broken spirits? We do not want to be crippled and asphyxiated in love, we must be able to soar; our spirits must be free.

Two women, two artists, and two lovers from two disparate corners of the world decided to redefine love. Their love for their respective partners was so great that they were ready to efface themselves. What is so uncanny is that they lived, loved, and worked in two very different time periods. One was born in the 19th century and the other in the 20th. One in England, the other in Mexico. Despite their different births, different cultures, and different sensibilities,  their lives followed quite identical trajectories.

Born as the daughter of a wealthy merchant from Liverpool, Dora Carrington, was essentially a free spirit. She always felt stifled at home, owing to the domineering nature of her mother. Her father was old and passive and completely at her mother’s mercy. The motherly lessons of morality and propriety were too much for Dora to bear. So when she earned herself a scholarship at the prestigious Slade School of Art at University College, London, she happily set foot on a journey that would change her life forever. Her decision to break away from the bourgeois roots and strike new ones into the fertile expanses of the creative and intellectual bohemia of the 20th century London helped her realize what she truly wanted: Lytton Strachey. Lytton was thirteen years her senior and a homosexual. But that never deterred Dora from loving him more than anything or anyone, even herself. So great was her love for Lytton that she even married his lover Ralph Partridge to enjoy the sustained proximity of her beloved. The three of them, Dora, Lytton, and Ralph lived together in the same house, and Dora continued to devote all her love and attention to Lytton. He was a key member of the celebrated Bloomsbury Group of London that constituted of such luminaries as E.M.Forster, John Maynard Keynes, Virginia Woolf etc. He was a man of letters, and his brilliance and erudition so awed Dora that she could hardly ever speak in his presence. Even though she was in her own right and by her own merit a painter par brilliance, she chose to carry on with her life as Lytton’s shadow; a mere sidekick or not even that. Many of her artwork bear testimony to this facet of her psyche, because she too was an autobiographical painter just like my next artist, Frida Kahlo.It is strange that these two women would live such identical lives.

Frida Kahlo, born to Guillermo Kahlo, a Mexican of German origin and Matilde, of mixed Spanish and Mexican ancestry, in the outskirts of Mexico, was always a sickly child. Polio had rendered one of her legs thinner and shorter than the other, giving rise to her lifelong discomfort with her own physicality. Then at the age of eighteen, she suffered a terrible near death bus accident, leading to a broken spinal cord, a broken collarbone, broken ribs, a broken pelvis, fractures in her right leg, a crushed and dislocated right foot, and a dislocated shoulder. In addition, an iron handrail from the bus had pierced her abdomen and her uterus, compromising her reproductive capabilities. Gerry Souter in his biography of Kahlo writes, “The scene of the accident was gruesome. Somehow the collision tore off Frida’s clothes, dumping her nude onto the shattered floor of the bus. Seated near Frida had been a painter or an artisan carrying a paper packet of gold gilt powder. It burst, showering her naked body.” She lay there like a vision in gold. That is how she continued to be, a striking beauty in the face of the most extreme affliction, anguish, and physical discomfiture. She was such a resolute and strong woman that she overcame her physical limitations; her broken body, her damaged leg, her degenerative neurological disease; getting back on her feet, doing what she loved best, paint, and love like no other women could have. She fell in love with the famous muralist, Diego Rivera, who had been commissioned to paint the walls in her school. Diego Rivera was a fubsy old man, much married, a communist, and a celebrated lady killer. Frida married him knowing well enough that this man would never be faithful to her. That it is his work and his perversions that were going to take precedence in their lives and she would have to be content with playing the part of the doting wife.

Both Dora and Frida were great artists, who lived a bohemian life. They were bisexual. They had innumerable affairs and liaisons with people of both the sexes. They were both critical of their own work and never believed in the value of their art. They were both bruised in love and yet their love was way beyond any form of self-love. They were happy with their place in the periphery, willingly pushing their more successful lovers into the center stage.  They both believed that their love for their partners was the source of all their creative energy, yet their partners hardly ever played such a motivational role in their lives.  Probably that is why these women are known to the world, more for their personalities, lifestyle, and love lives, than for the oeuvre of their artwork. Whereas Frida’s works were mainly canvas painting in the Retablo mold, Dora had dabbled in a lot of other forms of artwork, such as furniture painting, glass painting, woodwork and so on. Her trompe l’oeil artwork has been considered as some of her most masterful creations. Dora was very secretive about her work and never wanted to display it to the public. In that respect, after her divorce from Rivera, Frida had finally been able to overcome her fear of showing her work to the people. Before that, she would only circulate her stuff among friends just like Dora.

Frida and Dora were always in touch with their feminine as well as their masculine sides. They cut their hair short and experimented with androgynous dressing. The images below bear testimony to that: 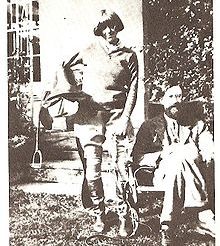 The portraits of friends and acquaintances by Dora and Frida share a likelihood in terms of the honest depiction, sense of melancholia, and profundity of emotions depicted in the same. 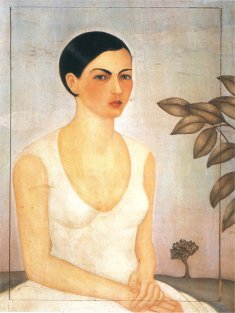 Although Frida’s self-portraits are often allegorical and quite sinister unlike those of Dora’s, they are alike in their brilliant detailing and use of colors. 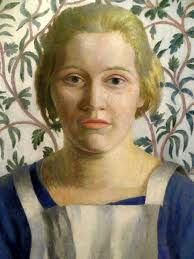 It is quite surprising that separated by a decade, in two different parts of the world, two women would think, feel, and paint so alike. That they would be riddled with the same questions of birth and identity, use their work as a personal blog, love someone with an ardor rare to find, happy to glow in the light of their more successful partners, and eventually die an unnatural death.

It is well known that Dora shot herself in the head following the untimely demise of Lytton Strachey. It is said Frida died of heart attack, but it is widely believed that she died of a self-induced overdose of drugs.

Both of them were also known for having written quite a number of letters in their lifetime. Letters that give us a glimpse into their complex psyche, their love, their pain, and their desires. Written in lucid words, overflowing with passion, and creativity (Dora used to doodle in her letters) these written testimonials are a mirror to their unique spirits.

In a letter, Frida writes:

Mirror of the night

Your eyes green swords inside my flesh. waves between our hands.

All of you in a space full of sounds — in the shade and in the light. You were called AUXOCHROME— the one who captures color. I CHROMOPHORE — the one who gives color.

You are all the combinations of numbers. life. My wish is to understand lines form shades movement. You fulfill and I receive. Your word travels the entirety of space and reaches my cells which are my stars then goes to yours which are [sic] my light.”

So much for love.

My love inspires me to speak my mind, to pen down all those words jostling in my head in search of an articulation. It is not just an Auxochrome, it is a Chromophore too. Shouldn’t love be a Chromophore too? I wish it were for Dora and Frida because they are way too close to my heart now that I have looked into their beautiful souls and realized how lucky I am.